I Could Write a Sonnet GIVEAWAY!

And now for the moment you've all been waiting for, the Reveal of the Giveaway prize!

I can't believe it took me a week to get it together! You see, I had quite a few hick-ups in being able to get things together, but we'll get to that in a minute.

I have decided to give away this handmade vintage style Newborn Baby bonnet! 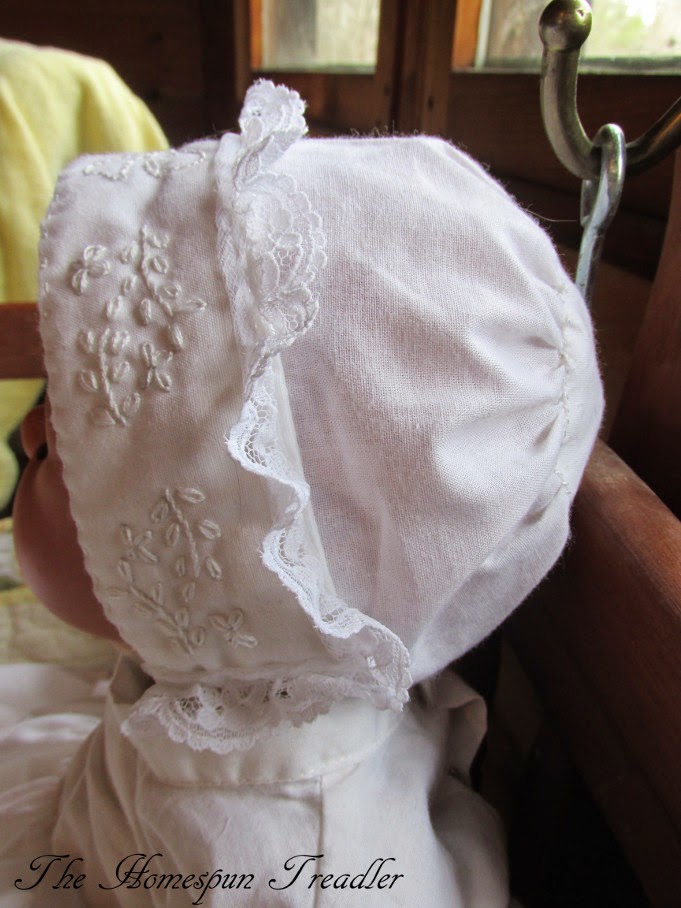 It didn't take me long to decide to make a bonnet, it's just everything that came up in between that was aggravating. Moments after I announced on my Facebook  page that I would be hosting this giveaway, my Mother became ill and ended up spending the weekend at the Hospital. All is well now, but it took a while for life to settle back to normal. 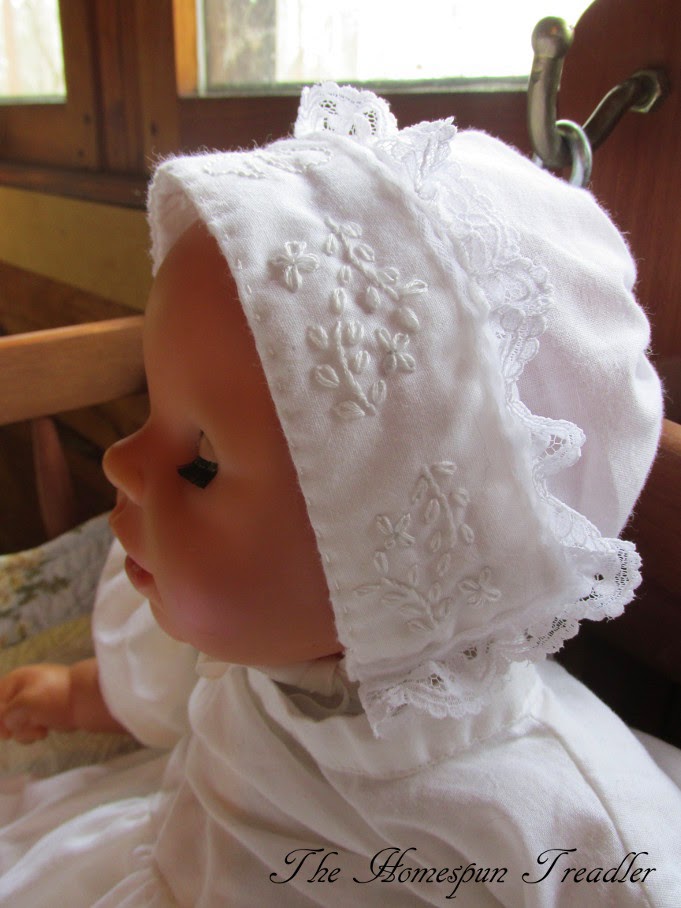 \
I started off by grabbing McCall's 4865 from my stash. You would think that, being McCall's, that everything would be straight forward and come together easily.... no...
I cut out a newborn size and gave it a large seam allowance.. and ended up with something big enough to fit my 2 year old Niece..  ﻿ 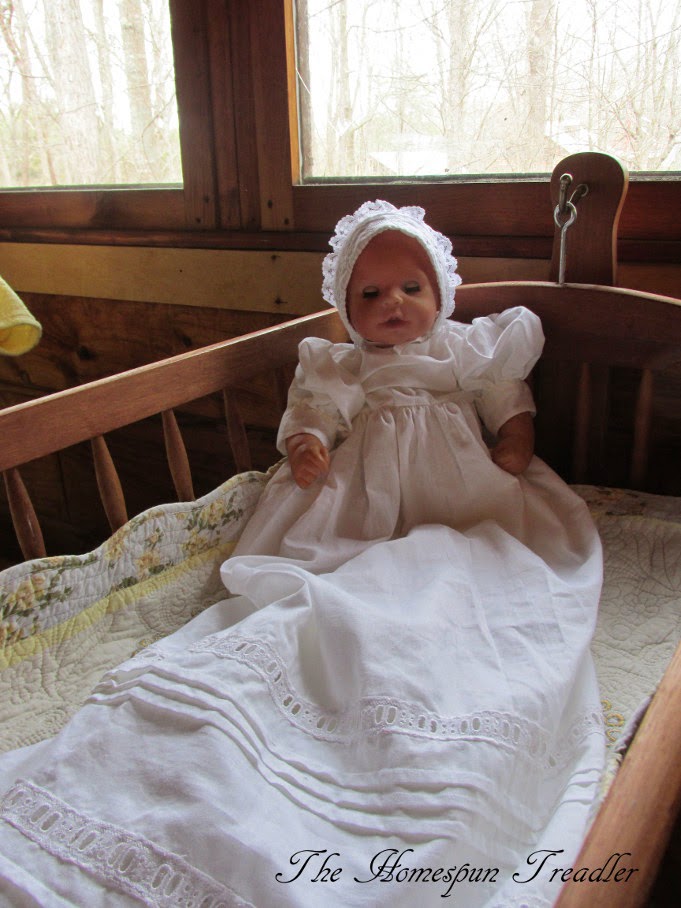 I pondered for a day or so on what to do next, when I remembered I had Vintage Simplicity 2656 in my stash as well. 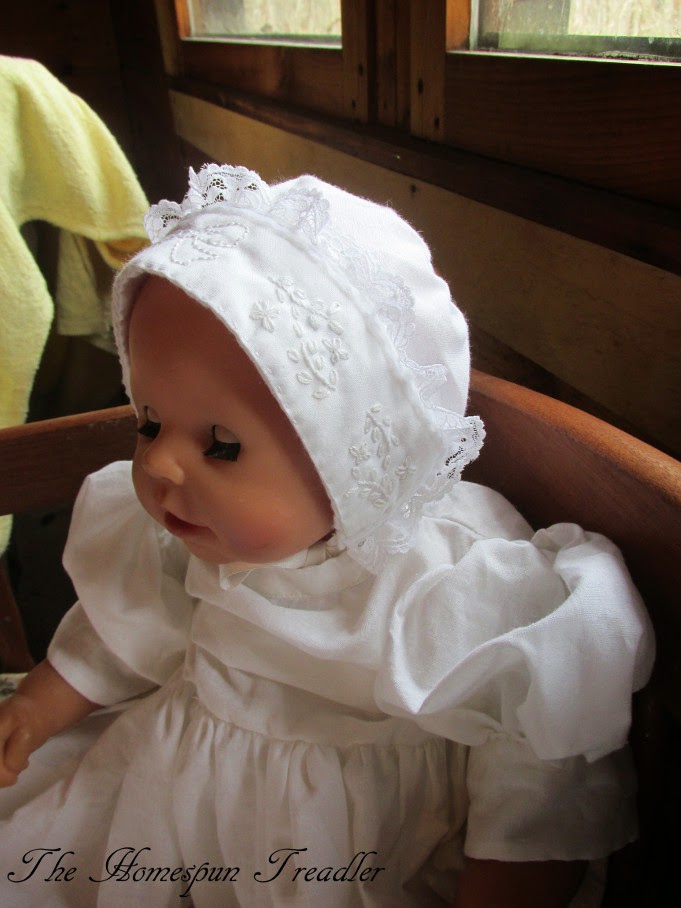 This pattern was a joy to work with! And it came together like a dream!
It is modeled here by my favourite baby doll when I was little, who's name was changed so many times I can't remember what it was. Chrissy, I think... She used to coo and cry, wake and sleep, but alas no more.. :( 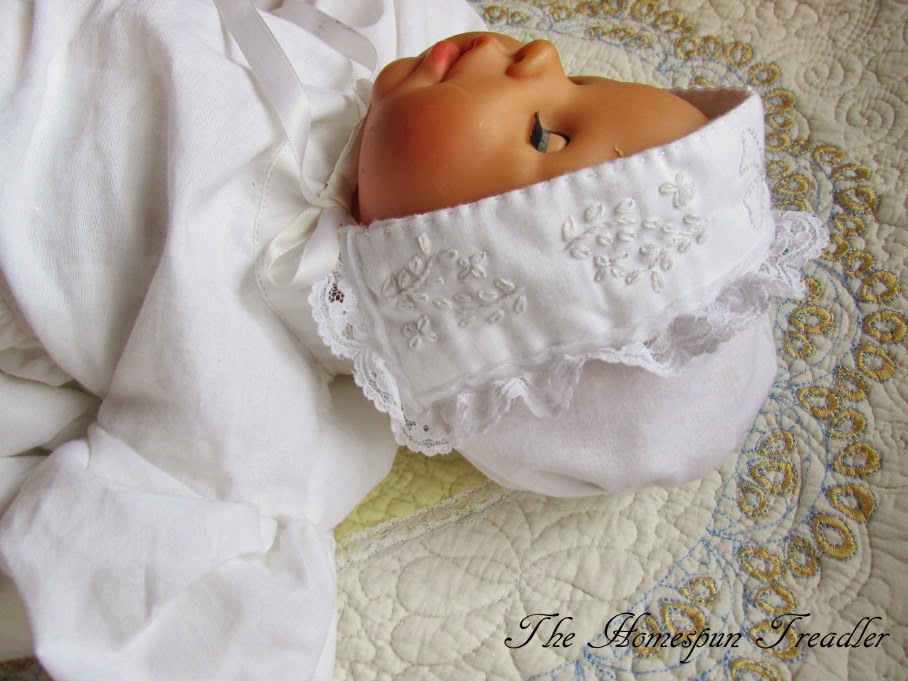 The dress she is wearing is one I made last year that won a blue ribbon in my local county fair. The dress is NOT part of the giveaway, just the bonnet.

The bonnet is mostly hand sewn with white hand embroidery across the band. The embroidery is based on a vintage pattern I found through Pinterest. 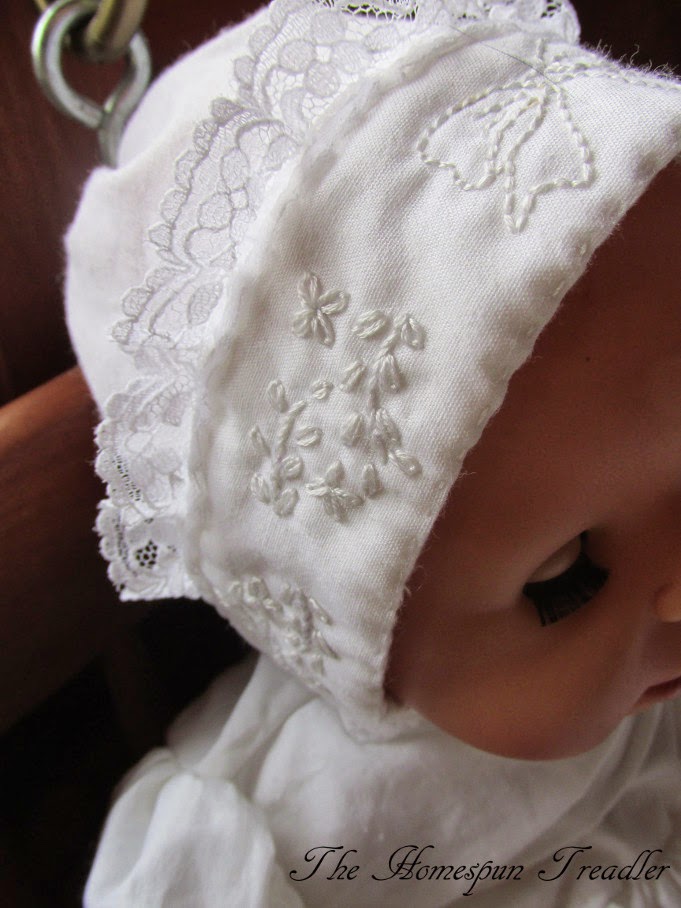 It is made in Newborn size and gathers at the back in a sweet little padded "Button" There are ribbon ties that can be tied in a bow under the chin. 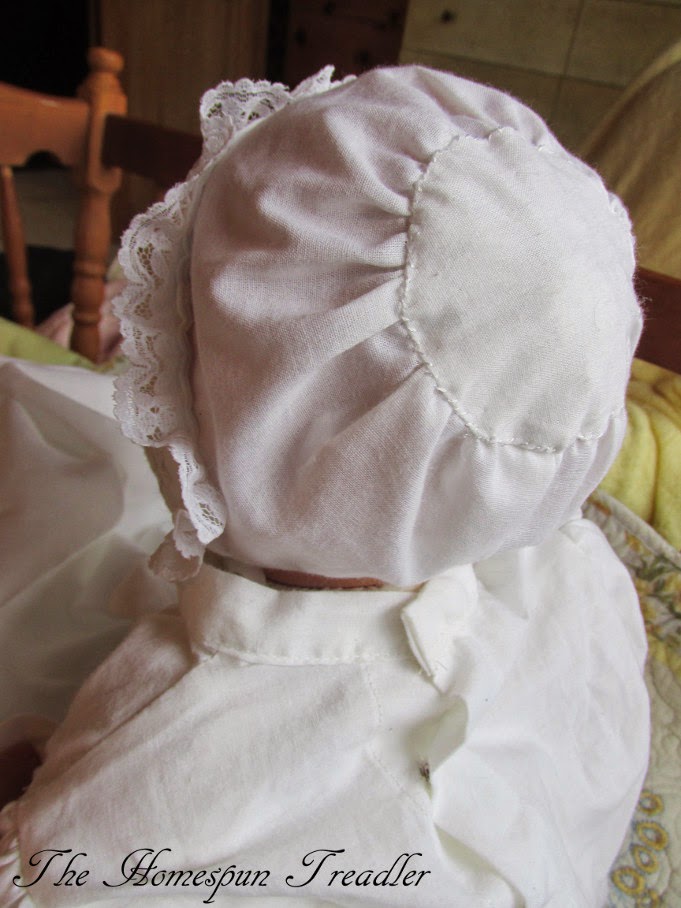 To enter, simply follow the instruction in the "Widget" below!

a Rafflecopter giveaway
Posted by Unknown at 4:02 PM 4 comments:


I have decided to join in on the "Sew for Victory" Challenge as can be found on Lucky Lucille's Blog. (Click the image below)

I have chosen this pattern and fabric. Now to just figure out which of the views to do! I bought it for the square neck, but I love the sweetheart too! 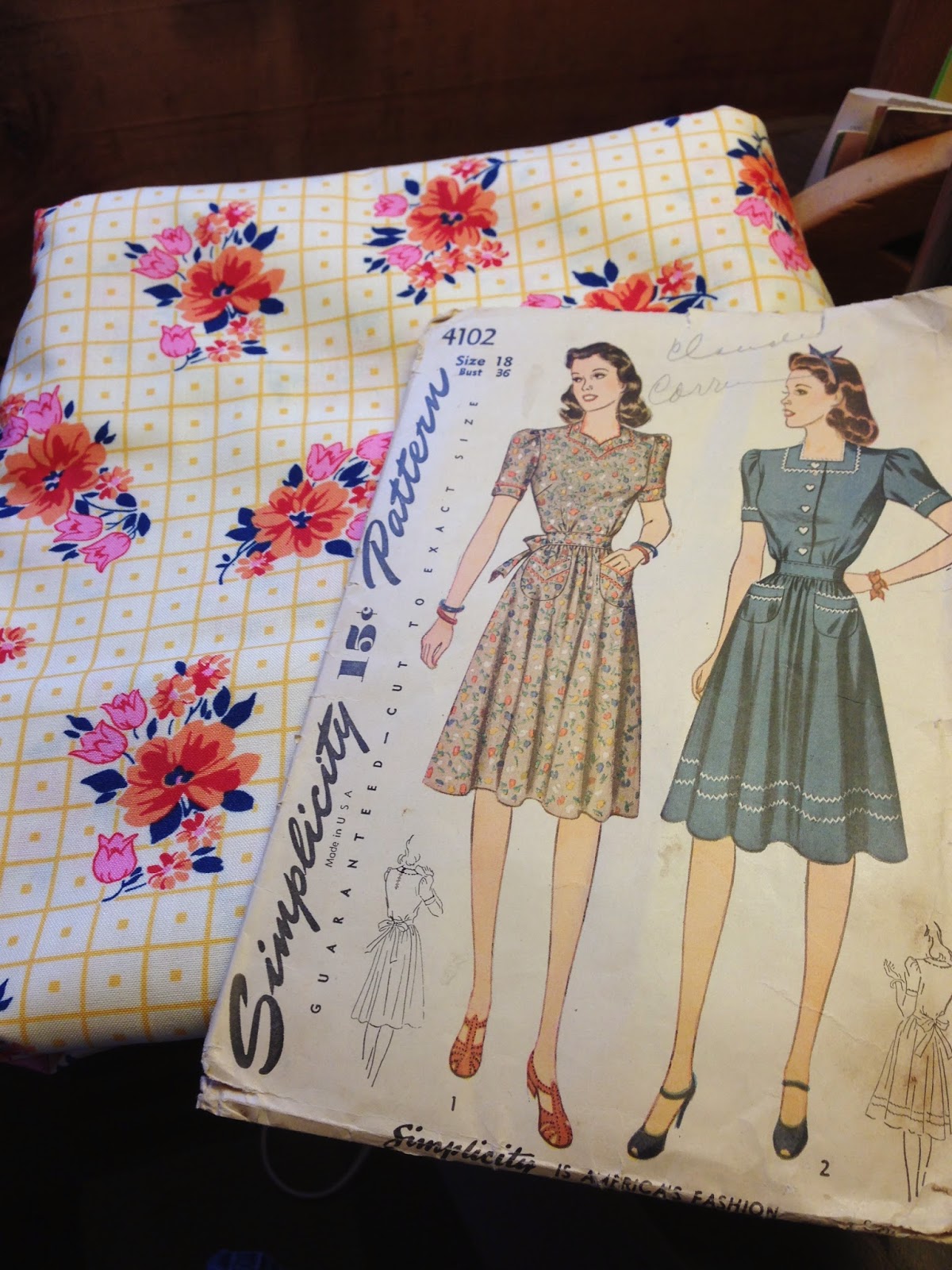 What do you think?

PS. For those of you who don't follow me on Facebook, There will be a "50 Likes!" Giveaway coming up soon! I just have to get everything together and I've had a few hick-ups along the way, but will soon have them resolved and ready to go. So keep an eye out!!
Posted by Unknown at 2:21 PM 1 comment:

It's been rather a long time since I've been in the mood to sew for myself, but lately I've been watching a lot of Old movies and I just couldn't help but catch the bug again.

I wanted to put a little bit of spring in my wardrobe, so I went with this sleeveless number, a 50's  mail order pattern that I picked up on Etsy. 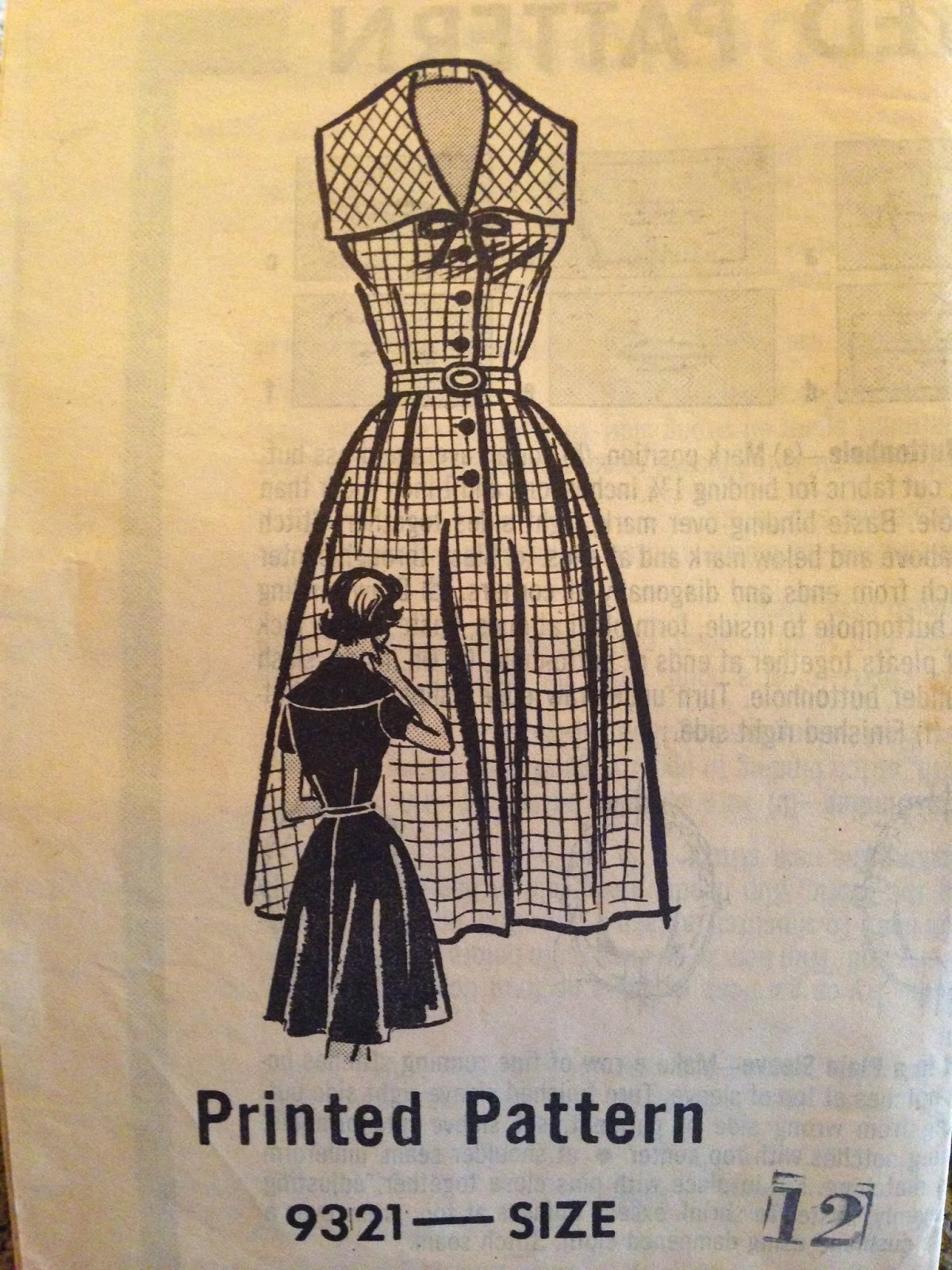 I had to expand the pattern quite a bit, as always, since I will never have a 28" waist... And while trying to save money I ended up buying only 2 1/2 yards  of fabric instead of 3. So I did make quite a few mistakes, but in the end they didn't even matter! 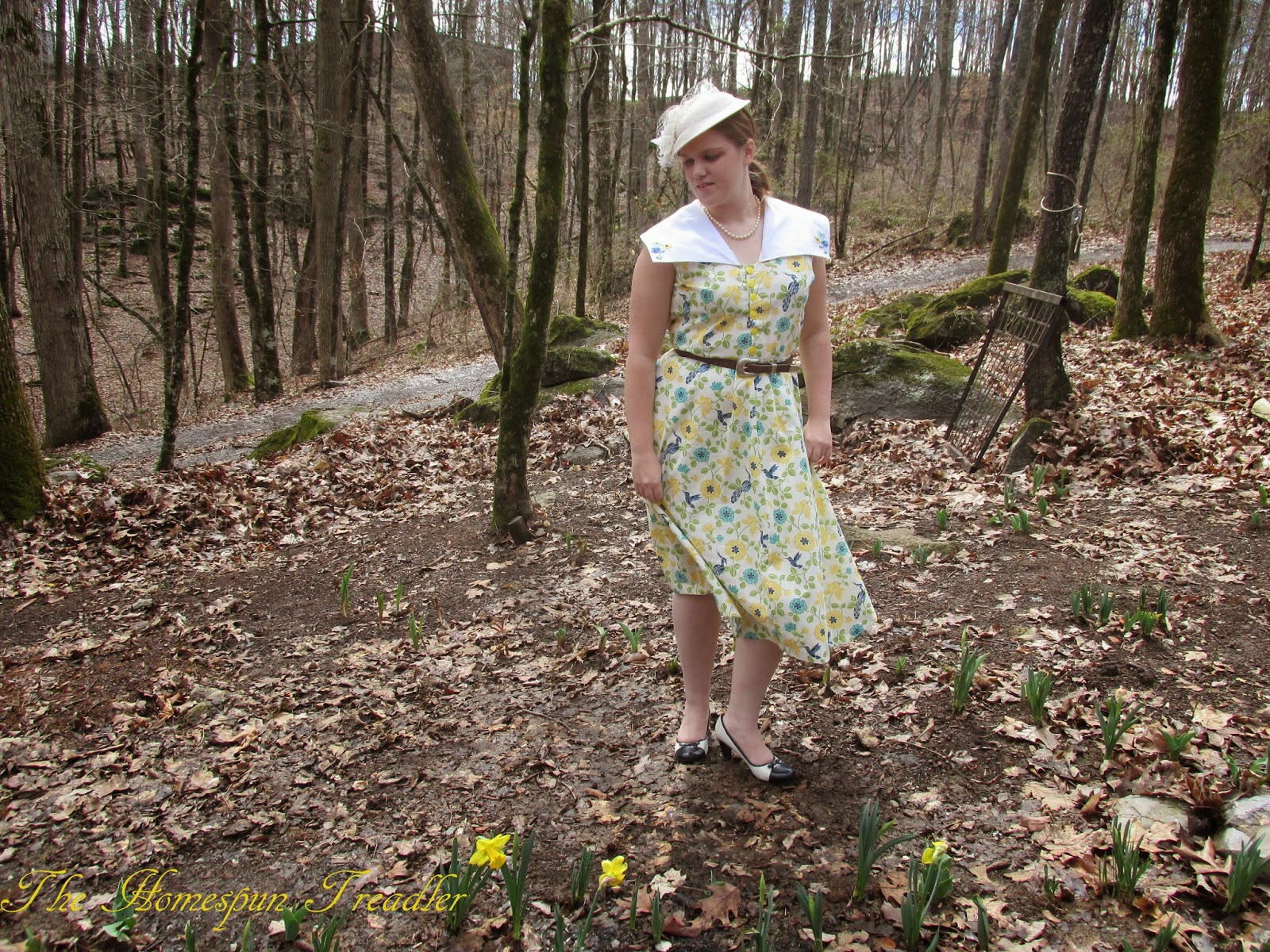 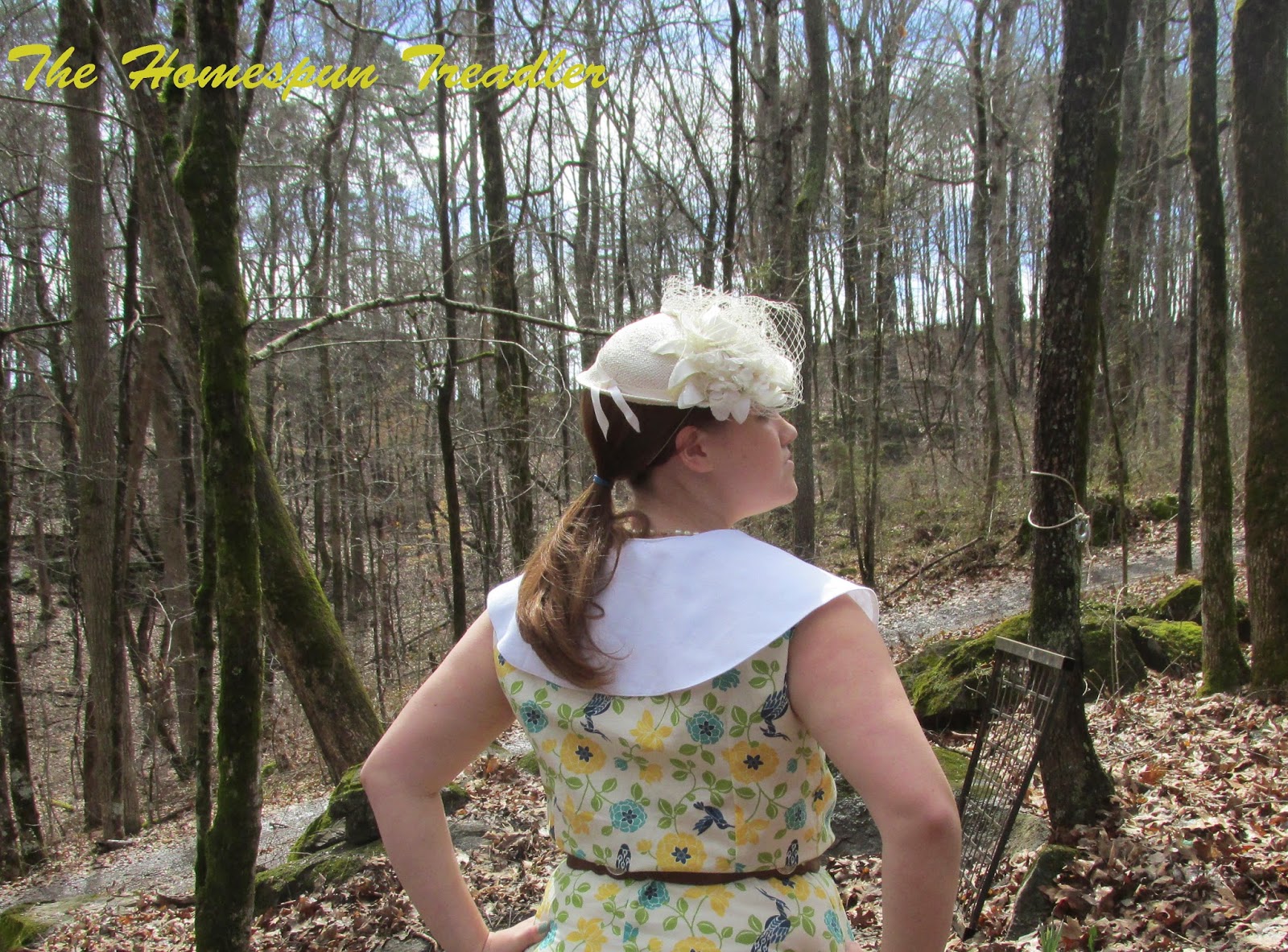 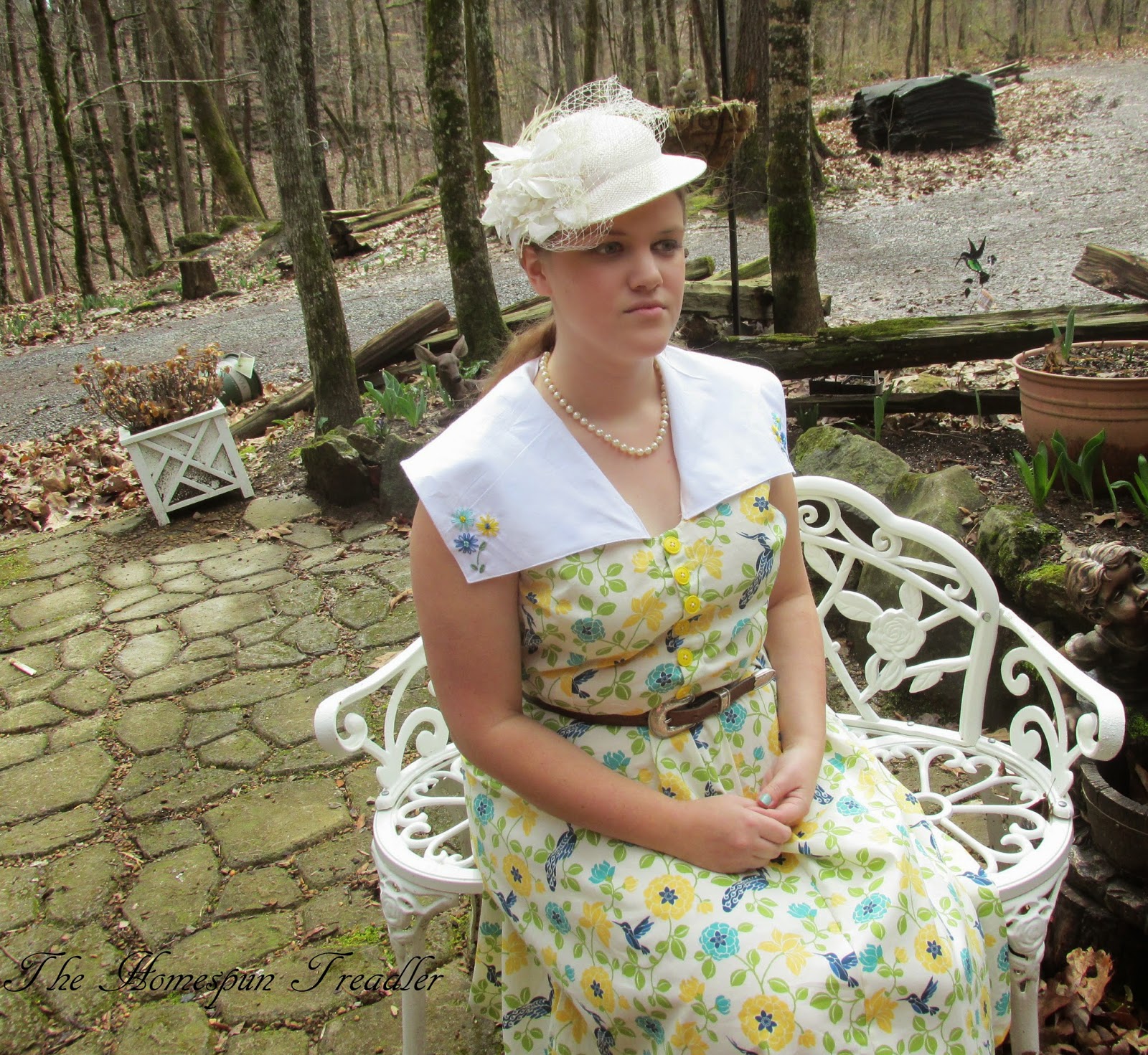 To dress things up a bit I put just a few lazy daisies on the collar. The greenery was done with satin and stem stitch, and the centers of the flowers are French knots. 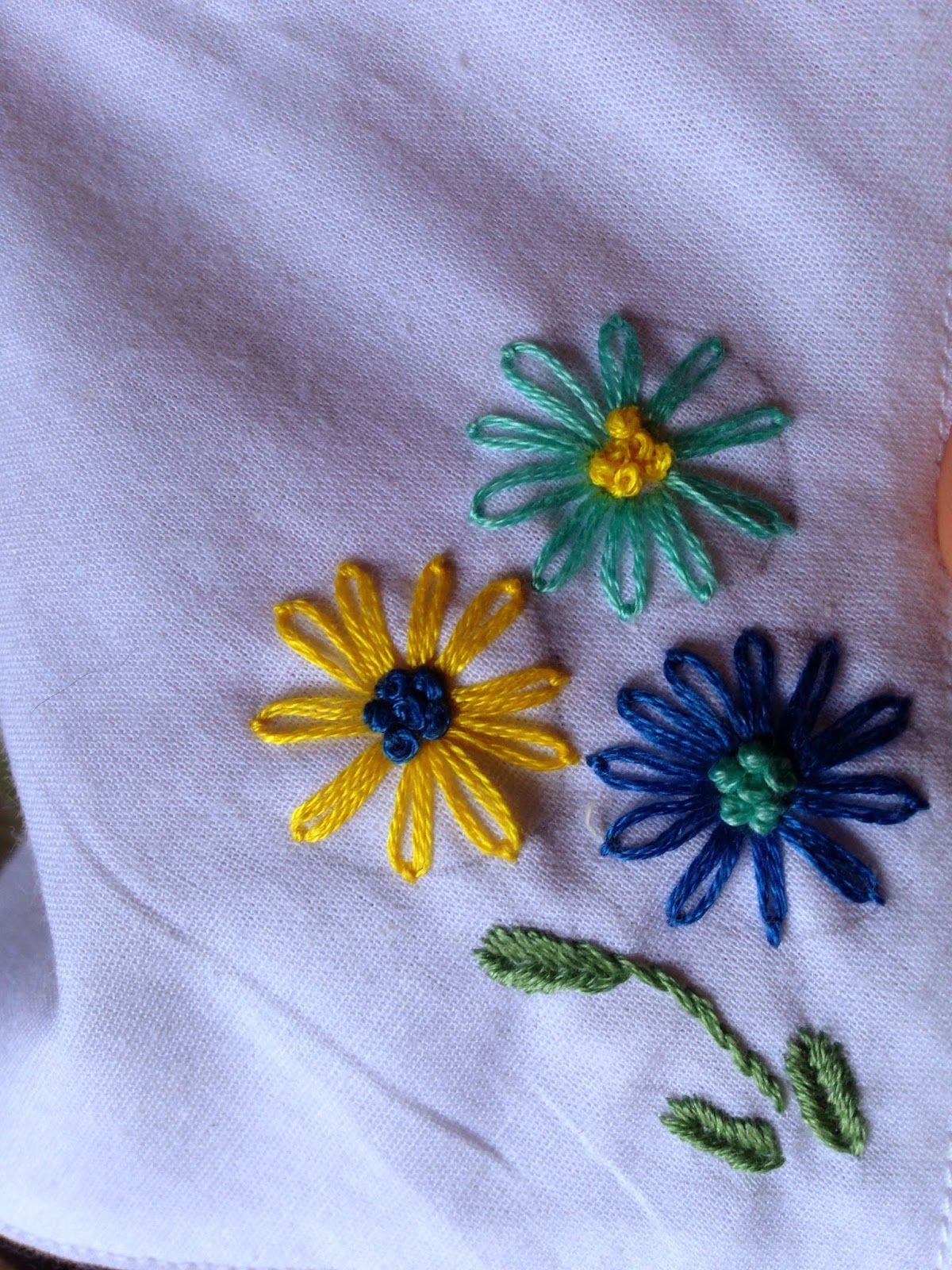 Shoes: Payless, old standbys, I've had them for years.

This dress has to be one of my favourites that I've made. And I'll definitely be making this pattern again.

Posted by Unknown at 1:31 PM No comments:

Jumping Into a Rew Realm

In my last post I showed some pictures from my last SCA event.

This event was what is called a "Collegium" event. Take that exactly as it sounds, It was en entire day of classes on everything from music to archery.

One of the Classes I took was on Goldwork embroidery, in which we learned the basic couching stitch.

I have been interested in this subject since I joined up, as I have enjoyed modern embroidery for years, so this was a great starting point. The moment I came home I ordered the type of thread I was recommended which is "Japanes gold #7" from Kreinik.

I'm not sure what this company was thinking but they sure did send me for a loop. The company is based in West Virginia. I'm in Tennessee so that's not too far, I could almost spit and hit the factory...

But instead of letting me order from them, they gave me more local "Mom and Pop" stores to order from. I chose one in Virginia, which is also spitting distance. They did not have it in stock so in turn THEY had to order it from Kreinik. You know how long it took to get to Virginia? Over three weeks. and then it was off to me... Yargh! what a hassel!

Anyways, it came today so be looking foreward to some yummy gold work!

As I waited these past few weeks I decided to pass the time with another project. I got a little advice, did a lot of research and finally decided on this image 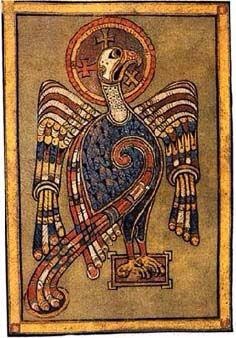 It is the symbol for ST. John from the Book of Kells, and illuminated Bible said to be from about 800AD. Of course it was painted and I'm embroidering, and there would be a lot to take into account to make this authentic. I don't believe personally I have done that, nor did I want to.
This is a practice piece to get used to doing what is called "split stitch"﻿ (A basic, much used medieval embroidery stitch) 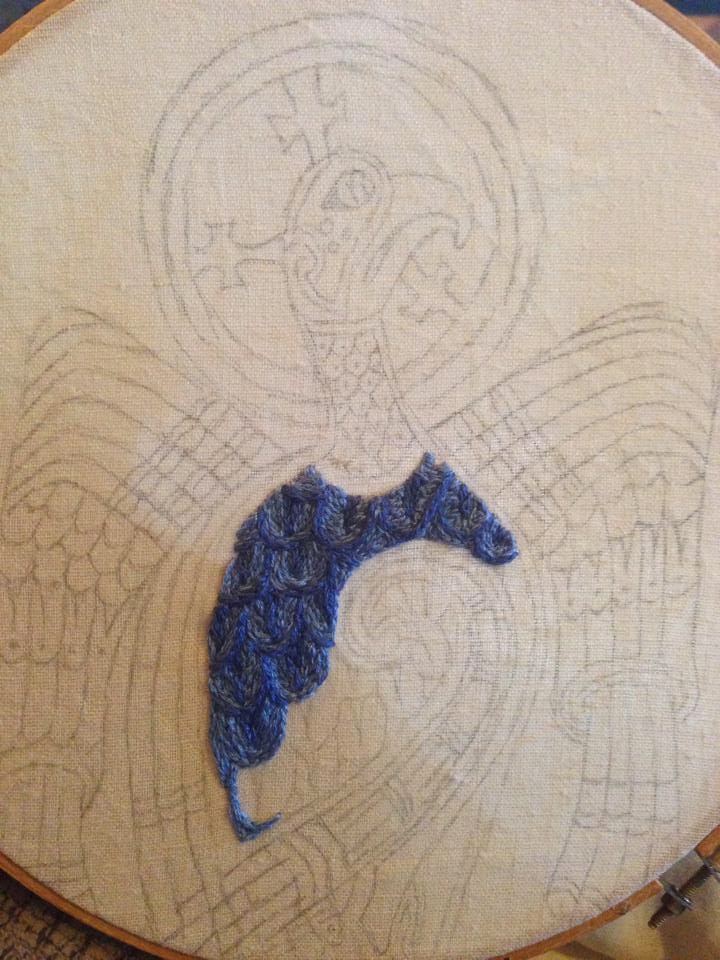 This is what it looked like at the end of day two, the body almost done and feathers in place. 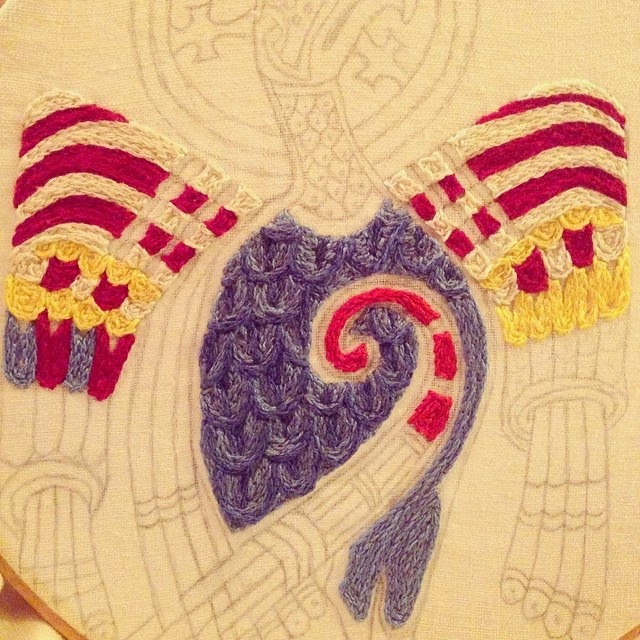 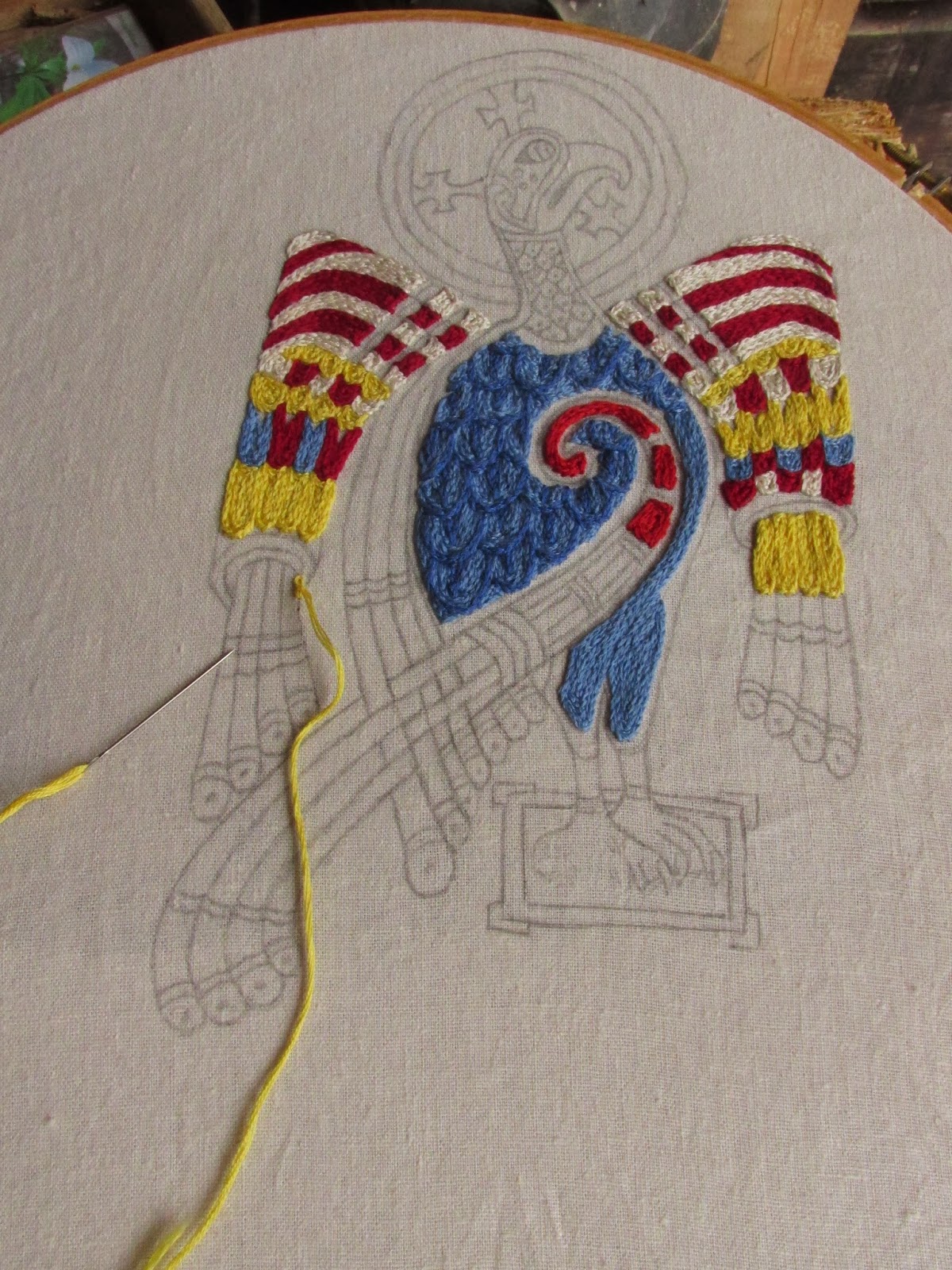 And here's what he looks like today, wings nearly done, and beginning on the tail.
﻿
Posted by Unknown at 3:43 PM No comments: