There's just something about cooler weather that makes me come alive again. I jump back into the sewing room and creativity flies from my fingers!

So over the next few days I'll be posting a few things all about the new projects I'm working on, and completed.

For today's project meet Seabiscuit. So christened several years ago by my mother, just after I found him. I Purchased Seabiscuit at and antique sale for the great price of $15 intending for her to be used by a friend's daughter when she came to play. He saw several happy hours of play back then and has been gathering dust since. 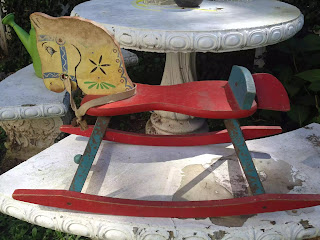 I pulled him out of the moth balls when my son came along, and he was seen in several of E-bug's "Monthly" baby photos.


But then one day I realized something. Just after bug started walking he grabbed hold of the seat and red paint flakes came away on his hands... And mama's danger warning went off! No more playing with Seabiscuit!

I recently decided to do something about it. I could put the little friend away, never to be used again, or I could paint it. And I suddenly hear antique collectors everywhere gasp in horror! I thought the same thing. Wouldn't it be sacrilege to cover up the original finish? Perhaps... but if it was only worth $15 to someone who knew what they were doing, then it was worth more to me to have my children able to play with it. So to Lowes I went. 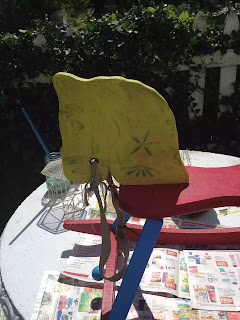 Yesterday I took it out in the sun and set to work. And here's what he looks like now! 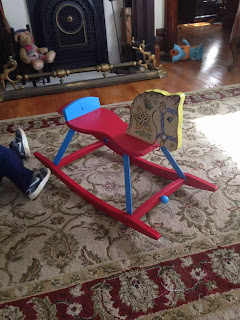 The face was made with a, now tattered, decal, so I painted the more faded side, and left the other mostly untouched. I'm not worried about lead paint with the decal so I'll leave it alone for now and someday, go in with smaller brushes to re-work the details. Until then, I simply used a sharpie to brighten the details. 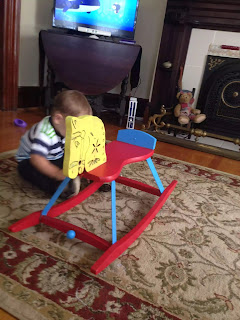 And now for a few action shots of a boy and his pony! Be sure to check out Our New Facebook Page for a couple videos of E-bug's first few rides!! 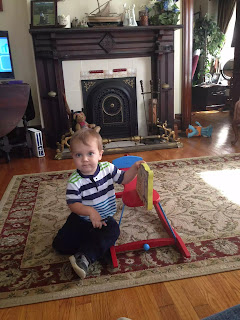 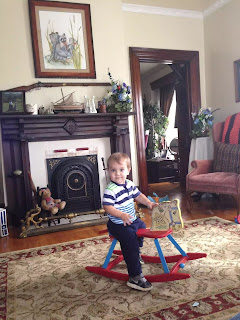